Inspiration – A Tribute to Buddy Gordon

The untimely death of their camp pal Buddy Gordon, at age 26, provided the catalyst for our founders to unite in a fitting tribute to their friend from their scouting by selecting a way to encourage others to share the beloved, character-building days of their youth spent together at Camp Ranachqua. 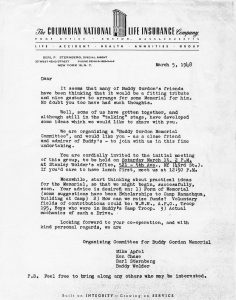 Buddy Gordon was an uncommon man.  He was urbane, yet diffident;  casual, yet polished;  uncomplicated, yet complex;  incisive, yet gentle;  democratic, yet exclusive;  broad, yet inclusive;  keen, yet kind  His finger was poised on the pulse of the day, and you knew you could trust him.  He was responsible, thoughtful, considerate, embracing.

His parents gave him the unlikely aristocratic name of Wilfred Paul Gordon.  But to us he was Buddy Gordon, and he was easily everybody’s buddy.  He had maturity beyond his years, early on.  Believing in the cause for which we fought World War II, he said to the US Army, “Put me up front where the action is.”  He didn’t stop any bullets or take any shrapnel, but he volunteered to place himself in harm’s way, to put his life on the line in combat with the field artillery, to make himself historically relevant.  This was the measure of the man.

Buddy Gordon was the embodiment of Scouting’s philosophy, its code of honor and its traditions of friendship, leadership and service.  He was trustworthy, dependable, responsible and loving.

In his neighborhood of 183rd Street, his schools – Creston Junior High and Clinton High;  his college – CCNY;  his fraternity – Alpha Phi Omega;  his military service – the Artillery;  his career – B. Altman.  He was fun to be with, he was supportive and sympathetic, and he was lovable.  He was a “mensch”.  Whether a patrol leader, a scoutmaster, a troop leader at Camp Ranachqua, a student at CCNY, a First Lieutenant of Artillery, a department store manager, he brought his personal qualities, honed in Scouting, to bear with success.  And all those around him benefitted, and basked in the pleasure of his company.

Buddy’s untimely death, at the age of twenty-six, became the spur to efforts to further the experiences and ideals of Boy Scout summer camping as it was experienced in the Bronx camp, known as Unit C and Unit E at Camp Ranachqua.  Those efforts, fused with similar stirrings in the minds of several camp alumni, eventually resulted in the establishment of The Ranachqua Foundation.  Buddy thus joined the hallowed group of Scouters, men and boys whose lives gave inspiration to the continuity of the Spirit of Ranachqua.

Celebrate the location and experiences that generated the organization many of our parents founded, supported and loved during their lifetime. Enjoy a weekend at this beautiful camp on Lake Nianque, near Bethel, N.Y., where our Dad’s went to summer camp and many Ranachqua families enjoyed Labor Day Reunions, half a century ago.

This Raffle is now completed.